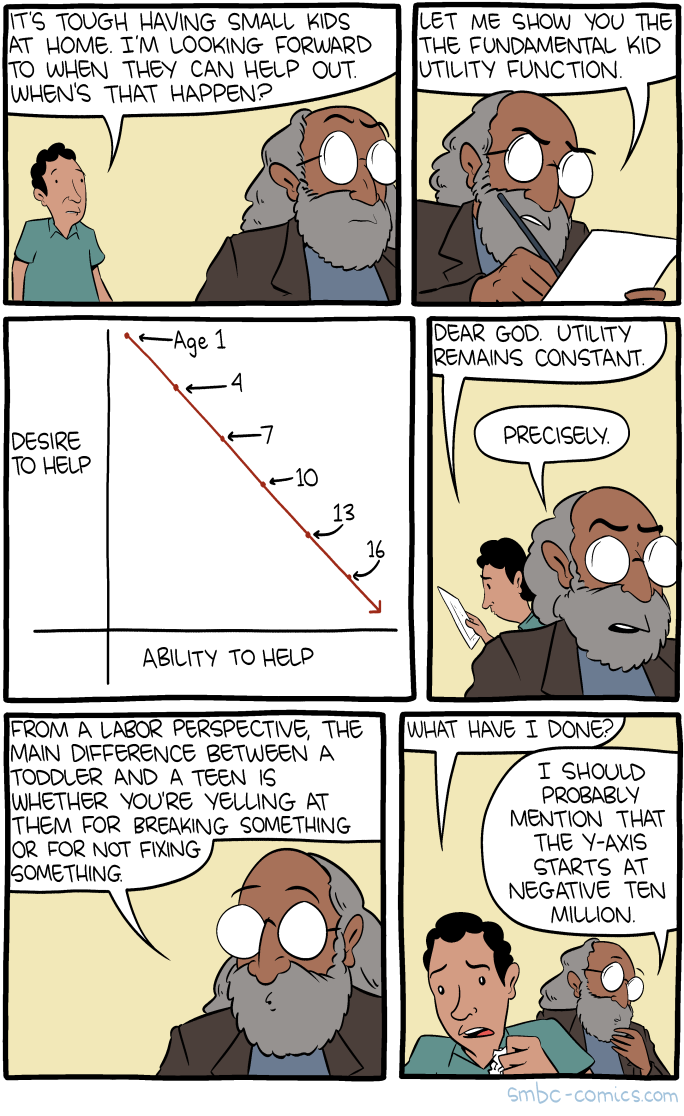 Hovertext:
Perhaps in the future we can equip small children with exoskeletons so that they will start cleaning their rooms.

Bert Bos, noting today as quite a notable day:

Very interesting to see what historic points made the cut for the timeline. The Zen Garden, acid tests, preprocessors... good times!

Andy Baio on the Decline of Independent Blogging by John Gruber
Wednesday November 30th, 2016 at 1:23 AM

But there a few reasons why I’m sad about the decline of independent blogging, and why I think they’re still worth fighting for.

Ultimately, it comes down to two things: ownership and control.

Last week, Twitter announced they’re shutting down Vine. Twitter, itself, may be acquired and changed in some terrible way. It’s not hard to imagine a post-Verizon Yahoo selling off Tumblr. Medium keeps pivoting, trying to find a successful revenue model. There’s no guarantee any of these platforms will be around in their current state in a year, let alone ten years from now.

Here, I control my words. Nobody can shut this site down, run annoying ads on it, or sell it to a phone company. Nobody can tell me what I can or can’t say, and I have complete control over the way it’s displayed. Nobody except me can change the URL structure, breaking 14 years of links to content on the web.

Couldn’t say it better myself. And always remember that Clinton won the popular vote by 1.7% points. Several presidents have won the White House with a much narrower margin.

What girls learn in 2016:
You can be President.

In my rush to get to 48G, about six rows from the very back of the jumbo Boeing 747 en route to Paris from New York City, I hit nearly every person I passed already sitting comfortably in their seats with my unwieldy seafoam green carry-on bag.

Finally, I arrived at my aisle seat in the middle row. Without glancing down at my neighbor, I dropped the heavy bag onto the floor, feeling giddy for my European adventures to begin.

But after stowing my bag in the overhead compartment above my seat, I looked down and saw an ultra-Orthodox Jewish man shaking his head no at me. He shook his head over and over again to make his message crystal clear. My mood immediately shifted from excited to anxious.

I had read about Orthodox men refusing to sit next to women on planes before, and knew it was becoming a serious problem for Israeli airlines, where tensions between secular and Orthodox Israelis already run high.

That said, I respect those who do observe Negiah and Niddah. Whenever I encounter an ultra-Orthodox Jewish man who doesn’t want to shake my hand, I don’t take offense; It’s his decision and interpretation of Judaism. Other people’s bodies are their own to do with what they will, and it’s not my place to overstep that boundary. But when my physical comfort is compromised because of a belief that touching another woman will somehow lead to sex or impurity, that women are too tempting to even sit next to on a plane, well, that’s the devotee’s problem—not mine.

My parents taught me about a time before I was born when black people were forced to move from their seats, and I always told myself that I’d never quietly submit to anyone who demanded I move because of who I am—in this case, a woman.

Adrenaline rushed through me. I’ve never been one to cower in the face misogyny.

I’ve never been one to cower in the face misogyny.

As soon as the ultra-Orthodox Jewish man shook his head, and motioned for me to switch seats with a man several rows up, I turned to him and said calmly but firmly, “I know what’s going on; I understand. And I respect you, but you must respect me.”

I continued, “I know you can’t sit next to me, and that’s alright with me, but I’m afraid it is you who needs to find another seat. I’m not moving.”

The man smiled warmly; he was neither mean nor angry. But I was angry that he wanted me to move instead of moving himself. Beneath his veneer of kindness was a singular motivation: to get me away from him—and that felt bad.

For a few minutes, we sat next to each other. I shifted in my seat uncomfortably, and kept my eyes fixed on Air France’s literature in the seatback in front of me. Meanwhile, the man tried to get the attention of every other man who walked by us. I became frustrated and felt antagonized. I didn’t want to yell at him, but I had made myself clear: I wasn’t moving. So, I didn’t know why he wouldn’t stop trying to get men to take my seat. He wasn’t listening to me, and I knew that underneath all those smiles was plain disregard for my comfort and respect for my womanhood. Exasperated, I got up and walked to the back of the plane to complain.

“If he cannot sit next to a woman, then he needs to find a seat of his own,” I told the flight attendant.

“There’s three of them and one of you,” she responded, saying it was a full flight.

“I paid for that seat—that is my seat. If he wanted to ensure he’d be woman-free, he should have purchased the whole row,” I exclaimed.

We went on like this, her and I, for several minutes.

“I know it,” she said sympathetically. “I’ve had to deal with this before.”

The flight attendant assured me that she didn’t think it was fair, either.

When I looked back towards my seat, there was a man sitting there. No one had asked for my permission—he just took it while I was complaining to the flight attendant.

“Is it okay?” she asked me, motioning to the man who now occupied my seat.

“Well, what can I do at this point?” I replied, defeated.

After several minutes in my new seat, two rows behind my old one—and two rows from the bathroom at the very back of the plane—I began to feel angry again. If I had to be displaced, I should be upgraded. The flight attendant laughed in my face at my request.

I knew that underneath all those smiles was plain disregard for my comfort and respect for my womanhood.

Using religion as an excuse for inequality isn’t a new phenomenon. Accommodating passengers based on their religious beliefs is a slippery slope; moving me, instead of moving the man whose religion dictates that he shouldn’t sit next to a woman, suggests Air France tacitly agrees that his beliefs trump my secularism.

But the response that bothered me most was from the man who claims he took my seat:

His version of the story illuminates the crux of the issue: To this man, I was a hysterical woman whose only goal was to get an upgraded seat. He neglected to mention the complaints I lodged against Air France for misogyny, and the many times I said it wasn’t my responsibility as a woman to accommodate his religious beliefs. None of that mattered in his eyes.

Apparently, Air France didn’t think much of my grievance, either, because it only offered me $150 for my “inconvenience.”

And that, unfortunately, is how patriarchy operates. Critics repeatedly said I should’ve done the nice thing and moved without making it a big deal—the subtext being that I should sacrifice my beliefs and comfort for the beliefs and comfort of a man.

fubrick
You know you are entitled when other women laugh at your request to be upgraded. And then demand compensation from the airline. There is no patriarchy. People ask people to switch seats all the time. It's just common curtesy. What if someone wanted to sit next to their child? Or their friend? Was there a big difference between 48G and say 53D or 43F? You just wanted to make a scene and to live out your fantasy of being a victim. Pathetic.